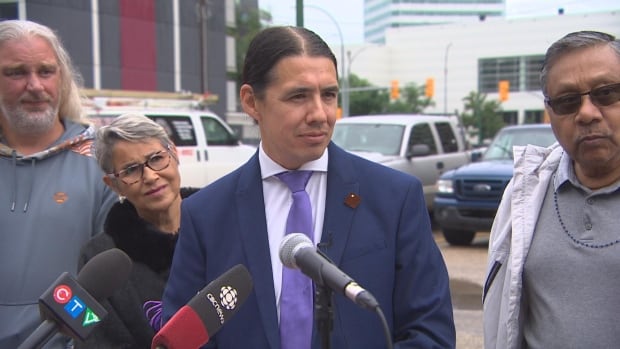 A Winnipeg mayoral candidate wants the city to tax parking lots on the city’s surface as if they had buildings.

“In this case of downtown surface parking lots, they should be evaluated as if they were a four-story commercial building,” Robert-Falcon Ouellette said Thursday during the campaign announcement at a downtown parking lot near Portage and Maine.

Ouellet described ground-floor parking lots as an obstacle to economic development and said they create an unsafe environment. He hopes that taxing properties as if they were buildings on them will encourage owners to redevelop them.

“Like the missing tooth in a smile, these many are a constant reminder that we need to do better,” he said.

Ouellet said the proposed tax change would increase revenue by an estimated $65.5 million.

However, the city does not have the power to do so at the moment. Former mayor Sam Katz made a similar proposal, but it would require the province to amend the City of Winnipeg charter.

That law states that the city must charge “the same rate of real property tax,” meaning any additional tax on parking may be subject to legal challenge.

It is at least the third pledge Ouellet has made during his mayoral campaign that would require changes to provincial law.

He previously called on Winnipeg city councilors to elect members of the council’s Executive Policy Committee – something the Winnipeg Charter also prohibits. The members of the committee are currently appointed by the mayor.

Ouelet also wants future municipal elections to be decided by a rank-ballot voting system, which would require an amendment to the City Councils and School Board Elections Act.

Within hours of Ouellet’s announcement, rival mayoral candidate Rana Bokhari issued a statement saying the proposal would be subject to “multiple lawsuits”.

Bokhari said an easy solution would be for the province to approve the city to levy parking tax.