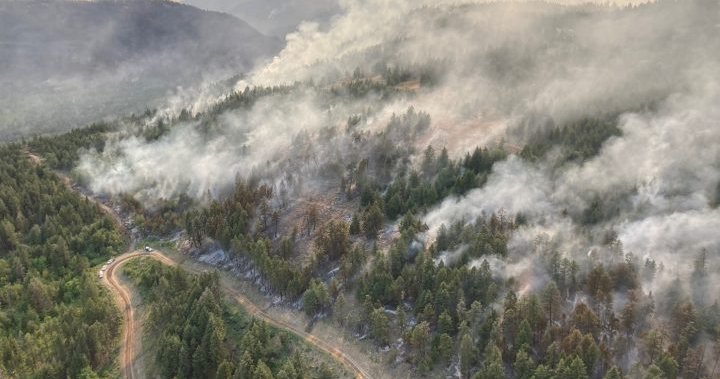 It’s been more than a week since the Keremios Creek wildfire first hit the southern interior of BC. As of Monday afternoon, the forest fire, located 21 km southwest of Penticton, has grown to an estimated 5,903 hectares.

The wildfires have forced thousands of people to flee their homes, including Jordan Olsoff, a resident of Olalla.

“It’s hard… it’s been stressful because my husband is also out for work, so it’s a lot I’m doing on my own,” she said.

“God, I don’t even know what day it is. It’s been a week and a half since we’ve been on the alert and it’s been really stressful.”

Her family is staying with friends, but on Monday she went to the temporary evacuation center in Keremios to see if other accommodations were available.

While there is no time frame on when people will be able to return home, the BC Wildfire Service (BCWS) says efforts to extinguish the fire have been successful so far.

,[On Sunday] The crew were able to successfully complete a set of planned ignitions along the southern corner of the fire near Olalla, as well as making some good progress on the northern side of the fire. So we have done some good work in the last 24 hours, and the crew are doing a really good job securing those lines,” said BCWS information officer Mikhail Else.

“The goal of those ignitions is to reduce the amount of time people leave their homes. It increases fire behavior for the day but the ultimate goal is to get people home as quickly as possible.”

Meanwhile, BC Highway 3A remains closed until Monday afternoon. Only people with temporary access permits and first responders are allowed through, which has caused some frustration, according to the Regional District of Okanagan-Similkamin (RDOS).

RDOS said, “Certainly, I can understand the frustration that people want to get back to their homes and property and the way people can go back to their home or property under orders to go back, if it is. There is an emergency,” RDOS said. Information Officer Eric Thompson.

“However, moving people back and forth is not a good situation because it is dangerous. Highway 3A was closed in the direction of the BC wildfires to make sure the area is safe for both the public and first responders.

There is no deadline for when the highway can reopen but officials are asking the public to be patient.

The RDOS Emergency Operations Center is in regular communication with the BC Wildfire Service to assess the status of all evacuation alerts and orders.

Anyone who is on command or alert is being advised to sign up for Emergency Support Services (ESS) for additional assistance including accommodation, food and medicine. Registration is online through ESS.

2:25
Couples try to save home from Keremos Creek wildfire

Couples try to save home from Keremos Creek wildfire