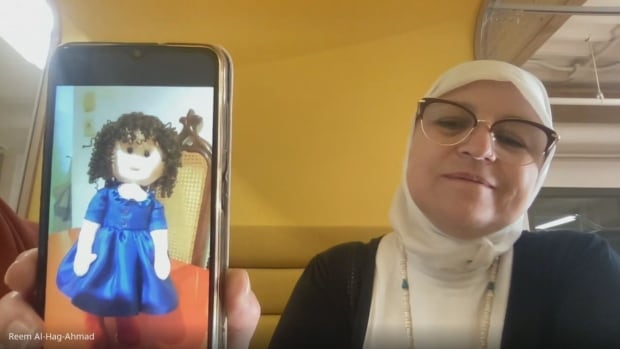 “My life has changed with the machine,” said Aldvamna, who was gifted her sewing machine by her assistant worker. “I am very happy.”

The Aldwamna experience is exactly what the organizers of IFSSA envisioned when they designed the downtown space in a strip mall behind MacEwan University.

The two-story center has become a home away from home for many members of Edmonton’s Muslim community, including students, volunteers, artists and refugees. It provides a place to pray, connect, collaborate, create and belong.

“When a lot of freshmen come in, there’s a lot of focus on just survival for the first year – making it through a system that’s foreign to them,” said IFSSA program director, Lina Avvad.

“A space like this really helps them think about how to flourish and that looks beyond the first year, envisioning a future where they can do what they want.”

Walking into the hub on a typical weekday, one can offer customers tea, coffee or water and a seat in the center of the space, which is painted in calming shades of orange, yellow, blue and green.

Staff and volunteers meet in the ‘Maker Space’ room where customers can sew and podcasting equipment will soon be available.

And below, workers are busy at the new food bank, its chirping yellow floors, and a customer base of more than 700 families each month.

“Just for people to come here, feel safe, sit, have a cup of tea, interact with a staff member or any other member of the community,” Farooq said.

She added that simply providing a monthly meal barrier does not get to the root of the customers’ challenges, be it segregation, employment, education or language.

“We need to address those issues before we put a Band-Aid on them to give them a food barrier. And we won’t know about those issues until they get into space. And don’t talk to us first.”

First conceived in 2020, Community Counseling revealed that local services too often mimic the experience of clients in refugee camps – waiting in line-ups with very little communication.

“We wanted this to change,” Awadh said. “We wanted to do something that was more hospitable and felt like home.”

She said the beauty of the space lies with the deliberately colorful geometric designs, one of many similarities between Islamic and indigenous traditions.

A striking star design on the ground near the entrance is a tribute to the Cree Star blanket, which is used for healing.

“The star guides Muslim visitors in the direction of prayer, and on Treaty 6 is a reminder to all the rich indigenous cultures where we are fortunate to have worked and lived. In Islamic tradition, the eight-sided star and the octagon symbolize duality. are coming together and coming together,” Awad said.

Only after arriving in Edmonton with her husband Aldwmna found her way to the IFFSA Hub. He had to say goodbye to a busy life with four children and five grandchildren who are settling in Austria,

“The honeymoon continues,” Eldwmna joked before revealing her initial feelings of loneliness. Finding community and purpose in the IFSAA Community Hub has helped change that, and business is booming.

Among her clients is the Austrian opera singer Juliet Khalil, who ordered a doll-shaped replica of one of her characters. A convention-organizer ordered dolls of pregnant women to help teach students and nurses about premature birth.