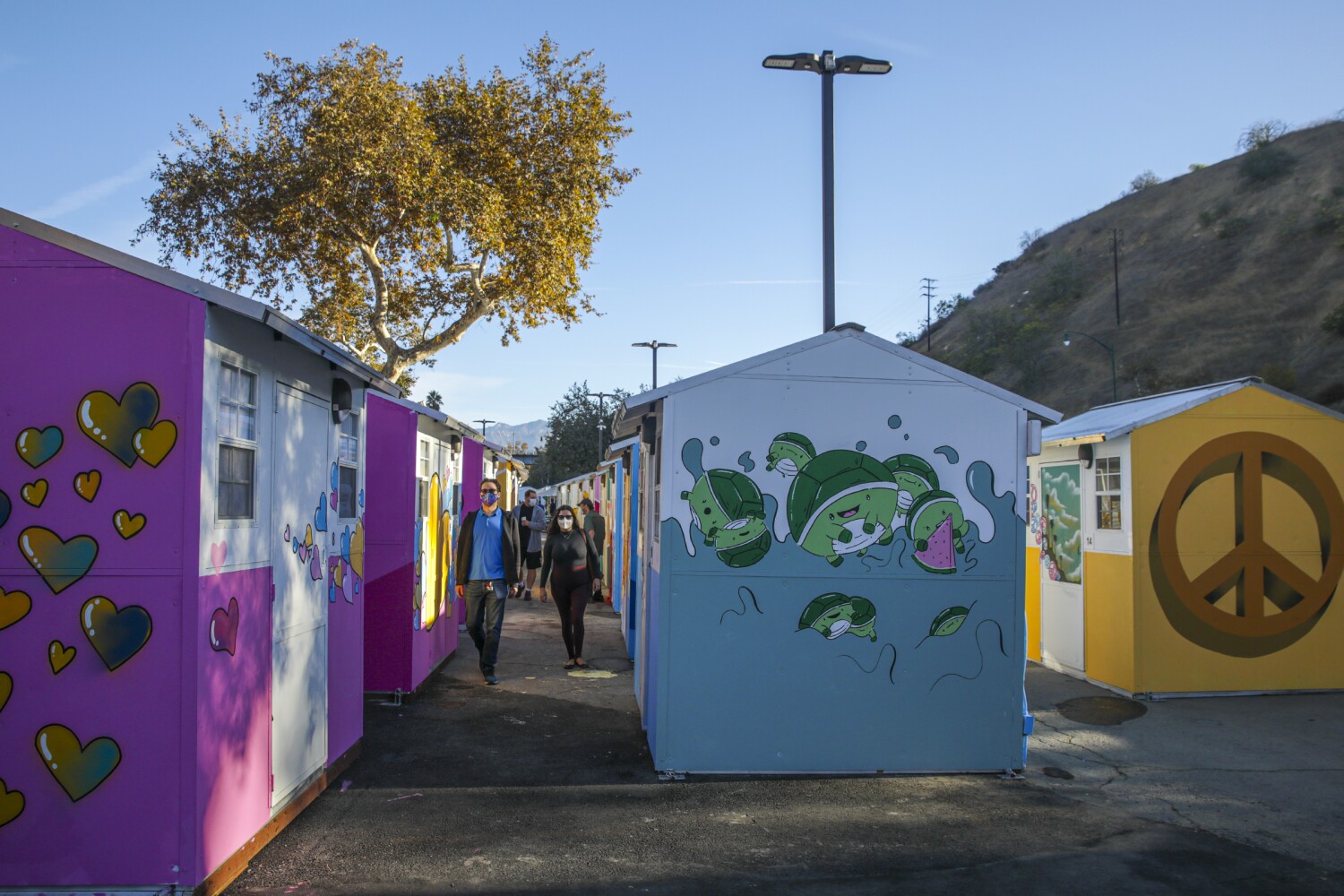 When it came time for my daughter to learn to drive, I drove her to an empty parking lot on Figueroa Street, opposite Eagle Rock Rec Center.

He hung things behind the wheel, but I wondered how half a block from a homeless camp down the 134 freeway could sit empty for so long. For years, there has been talk of ruining public space as the homeless population exploded.

On Wednesday, the parking lot was no more. It is now a small home village, with 93 beds in 48 structures.

LA City Councilman Kevin De Leon, a candidate for mayor, took to the stage at a ribbon-cutting and said the bright morning sun represented “a ray of hope and opportunity for our homeless neighbors.”

As he spoke, a heckler shouted from outside the fence.

“KDL is a liar,” said the protester.

It was not a matter of surprise. So-called homeless advocates have disrupted the mayor’s debate, shutting down one at a synagogue in Valley Village several days ago and calling for a different strategy.

“It’s about his mayor’s campaign,” Heckler said, accusing the councilor of not caring about the homeless. “Small tool sheds. These are small tool sheds, not actual dwellings. … He doesn’t give out house keys. He handcuffs.”

De Leon explained that the parking lot was on property owned or managed by the city, county and Southern California Edison. Ahead of his time in office, the parties came together to agree on a housing plan, which is certainly a better use of the property than serving as a driver training site.

In a time when permanent assisted living housing takes years to build and the average cost per unit has reached about $600,000, these tiny homes cost about $68,000, or about $35,000 per bed, according to De Leon’s office.

I stepped inside some of the smaller structures that honestly get their name. But two beds fit comfortably into the space, with one window, one door, and a swath of bathrooms and showers outside.

You have to shake your head at the thought of building mini-homes for the destitute in unprecedented public and private property conditions, with huge mega-mansions selling for over $100 million.

But for all that, are these tiny houses any better than cardboard boxes and tents?

In his speeches, de Leon likes to ask, “in which parallel universe” is it better to leave people on the street rather than move to various forms of temporary housing waiting for more permanent housing?

During the ceremony, I wandered on the road to the homeless camp. On both sides of Figueroa, there are tents on 134 underpasses. Over the years, I’ve noticed that the area is temporarily cleared and sometimes permanent habitats are found, but the tents always return much earlier.

Pedro Cruz, 76, came out of his small tent on the east side of Figueroa. I asked him if he would like to live in a small village and he said yes. He has already spoken to outreach workers and is on the list to move forward in the coming days on the official inauguration.

One man peeped out of his tent to tell me he definitely wouldn’t move into a tiny house because “better things are coming my way,” though he didn’t specify what that might be.

Afterwards, I visited the camp with Jane Damien, the homeless liaison for the Eagle Rock Neighborhood Council. He has known most of the camp residents and said he has already been contacted by outreach workers trying to fill the new tiny house village.

Like many other homeless camps, Damien said, poverty, mental illness and addiction are all factors. When it comes to housing solutions, she said, she deals with critics on the left who only want permanent housing and critics on the right who want to have homeless people arrested or moved elsewhere.

“They just want them to go,” Damien said.

“There isn’t enough permanent housing, and we’re fighting for that,” she said, but she thinks that many in the community support temporary and interim housing as a better and more humane option than leaving people out on the street. Huh.

We met Dana Blue, a former US Navy reservist and Best Buy employee who said she became homeless after a foreclosure at her mother’s home. Blue, 36, said she plans to move into one of the smaller homes, despite reservations.

She said she wondered what the rules would be, how the place would be run and whether “this is just another temporary solution to a really big problem that hasn’t been fixed yet.”

But for reasons of safety and hygiene alone, Blue said, she will test it.

“It’s worth a try if it’s driving people off the road,” she said. “I hope to get back on my feet and get out there. It’s not an ultimate solution. … Of course, I wouldn’t want to live in a tiny house for the rest of my life.”

Damien pointed to a nearby vigil for a man named Gabriel Estrada, 38, who died in his tent in February, of unknown cause.

“He was the fifth non-domestic person I know of to die on the streets of Eagle Rock since 2018,” Damien wrote in one. Condolence message For the Boulevard Sentinel. “He had a wonderful smile and an unarmed sweetness.”

Estrada, she said, was ready to move to the tiny house village.

Non-stop state of an eventOUS News

Gander works with the Muslim community to build a mosque and hire Muslim doctors...