Iranian security forces on Thursday continued their crackdown on citizens protesting the death of a 22-year-old woman after she was arrested by vice police, with at least 31 civilians lost their lives since the violent clashes erupted, AFP news agency reported.

Even as Iran continues to be at the center of global criticism and nationwide protests, the country’s Revolutionary Guards have called on the Islamic Republic’s judiciary to prosecute “those who spread false news and rumours” about the woman whose death in police custody sparked the protests.

Protesters in Tehran and other Iranian cities torched police stations and vehicles earlier today as public outrage over the death of 22-year-old Mahsa Amini last week showed no signs of appeasement.

Amini, who was arrested by Iranian vice police for wearing “inappropriate attire”, was tortured while in police custody and died three days later, according to the media. Iranian police, however, denied abusing Amini and said she died of a heart attack. Authorities say they are investigating the incident.

Protesters in Tehran and other Iranian cities torched police stations and vehicles as unrest sparked by the death of a woman in the custody of vice police escalated, with reports that security forces security would be attacked https://t.co/k3bRIwx6v4 pic.twitter.com/1cNWvO9w80

Along with expressing sympathy to Amini’s family and loved ones, the guards said in a statement, “We have asked the judiciary to identify those who are spreading false news and rumors on social media as well as on the street and who endanger the psychological safety of society and deal with them decisively.

Meanwhile, the United States imposed sanctions on Iran’s vice police, accusing them of abuse and violence against Iranian women and violating the rights of Iranian peaceful protesters, the US Treasury said. The Treasury added that it had imposed sanctions on the heads of Iran’s army ground forces and vice squad as well as Iran’s intelligence minister. He held the vice squad responsible for Amini’s death.

The protests have escalated over the past four days into an open challenge to the government, with women remove their obligatory headscarf in the streets and Iranians burning trash cans and calling for the downfall of the Islamic Republic itself. “Death to the dictator!” has been a common cry in the protests.

Protests over Amini’s death are the largest in the Islamic Republic since 2019, foreign media suggest.

Most protests have been centered in Kurdish-populated northwest Iran but have spread to its capital Tehran and at least 50 cities and towns across the country, with police using force to disperse protesters.

Nour News, a media outlet affiliated with a top security body, on Thursday shared a video of an army officer confirming the death of a soldier in the unrest, bringing the total number of security force members killed to five. in troubles.

A Mazandaran official said 76 members of the security forces were injured in the province during the unrest while the Kurdistan Police Commander announced that more than 100 security personnel were injured. 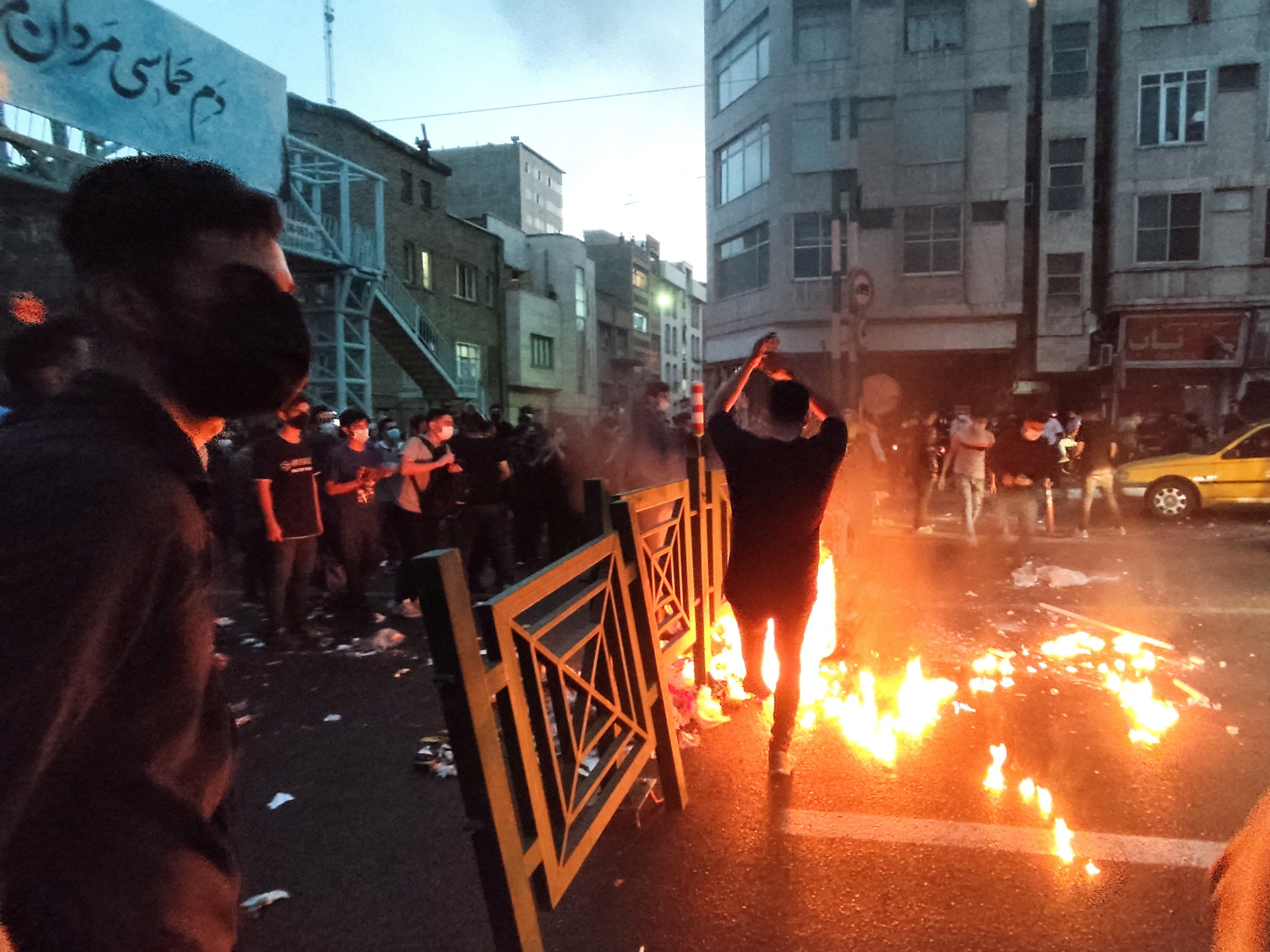 People light a fire during a protest against the death of Mahsa Amini, a woman who died after being arrested by the Islamic Republic’s ‘morality police’, in Tehran, Iran September 21, 2022. (Reuters )

To prevent the protests from escalating further, authorities have imposed internet restrictions across the country. According to internet monitoring group Netblocks, Iran is now under the toughest internet restrictions since the November 2019 massacre, with Largely closed mobile networks (MCI, Rightel, Irancell – partial) and restrictions on Instagram and WhatsApp.

⚠️ #Iran is now under the toughest internet restrictions since the November 2019 massacre.

The United Nations human rights office has called for an investigation into Amini’s death. The UN body said Iran’s morality police had expanded its patrols in recent months, targeting women who did not wear the hijab, the Islamic headscarf, properly. He added that verified videos show women slapped in the face, beaten with batons and thrown into police vans for wearing the hijab too loosely.

The United States, which is trying to revive the 2015 nuclear deal with Iran, has called on the Islamic Republic to end its “systemic persecution” of women. Italy also condemned his death.