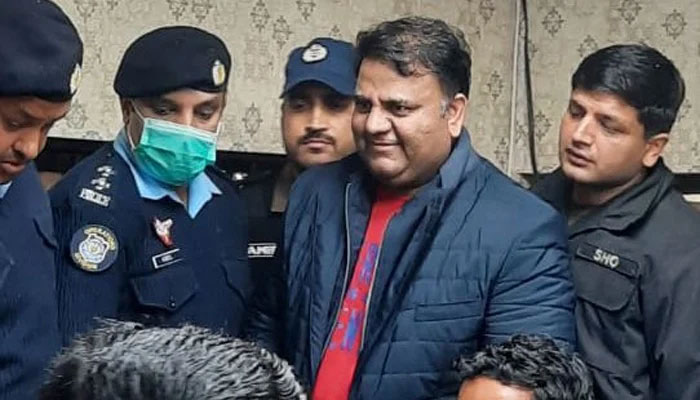 In the case against Fawad Chaudhary, who was arrested for assaulting the Election Commission members and their families, the district court has given its decision on the plea of ​​physical release.

Chief Justice Naveed Khan reserved judgment after hearing the arguments, which will be delivered soon.

During the hearing, Fawad Chaudhry asked the judge to allow me to speak to the family for 5 minutes and the same number of minutes to my lawyers.

He said that there were 1500 policemen outside, yet they handcuffed me in the courtroom.

The PTI leader said in front of the judge that I am an advocate of the Supreme Court, they have taken me out of the court with open arms.

On this, Fawad Chaudhry said that the state of the Election Commission is destroyed.

The lawyer also said that Fawad Chaudhry wanted to promote hatred against the Election Commission, electronic materials were available to the accused.

He said when I was reading the allegation in the court, Fawad Chaudhry was saying that Insha Allah and Masha Allah, the defendant has accepted whatever he said in the matter.

The lawyer of the Election Commission said in court that it is not right to decide about Fawad Chaudhry, the people behind the speech of the accused should know.

He said that a campaign is going on after Fawad Chaudhry’s case, the police has not yet investigated the details of the accused.

Fawad Chaudhry stood in front of the court that in the case, part of the rebellion has also been imposed on me, I have been in the ranks of Bhagat Singh and Nelson Mandela.

The PTI leader further said that such things were said against the freedom fighters, I did not say a word, I was saying the media’s words, my words were not understood.

He said there is no case against me, the plaintiff’s lawyer means that criticism is rebellion, then democracy will end, no one will be able to protest, if they can’t attack the electoral commission, then he means and that he is a man, he cannot do it. .

He said the Election Commission is not the state of the country or the government, I ask them not to spread hatred so that people come to their own level.

The PTI leader said that the Lahore police have arrested me, my phone has been taken and handed over to the Islamabad police, I am a senior lawyer, a member of parliament and a former minister of the federal government.

He said that I am not a terrorist who sent me to CTD, the investigative staff did not investigate me, my arrest was not in accordance with the law.

Fawad Chaudhry said that it is unfortunate that some things are being done against the opposition on the political issues of this country, sometimes we are at the top and sometimes at the bottom.

The court has changed before the appearance of Fawad Chaudhry in the labor magistrate court.

Fawad Chaudhry’s brother Faraz Chaudhry is also in court, he was released today after his arrest in Jhelum.

At the beginning of the hearing, Magistrate Naveed Khan said that somehow let Fawad Chaudhry come to the court.

On this occasion, Faisal Chaudhry asked the unrelated people to leave the court room.

Faisal Chaudhry said to the judge, “Where is Fawad Chaudhry?” where is the car. We brought them.

On this, the judge said that if there is space in the court, Fawad Chaudhry will bring it.

He further said that if there are 15-20 people in the court, Fawad Chaudhry will be arrested.

Later, the judge in charge of the court got up from the court and went back to his room.

Senior leaders of PTI continued to escort non-essential people from the court room, while Faisal Chaudhry told women workers of PTI that they will meet Fawad Chaudhry again.

Earlier, the lawyer Fawad Chaudhry Qaiser Imam reached the F8 court room of Islamabad. In the event of the appearance, bitter words and threats started between the police and PTI workers.

Meanwhile, the leaders of PTI Islamabad clashed with the police, the local leaders shot the workers and entered the court.

For Fawad Chaudhry’s appearance, the court room was changed due to urgency and lack of space.

Chief Justice Naveed Khan will now conduct the hearing in the second judge’s room, the lawyers of PTI and Election Commission have reached the court.

Justice Naveed Khan said about this that the court is on the second floor, there will be problems during the hearing.

He also said that the Shabbir Bhatti court is on the ground floor, the hearing will be easy there.

Fawad Chaudhry will be produced in the court of Chief Justice Shabir Bhatti after his arrest for threatening Election Commission members.

Before it was reported that Fawad Chaudhry would be taken to the F8 court under tight security, he was taken into a police car and wrapped in a white cloth.