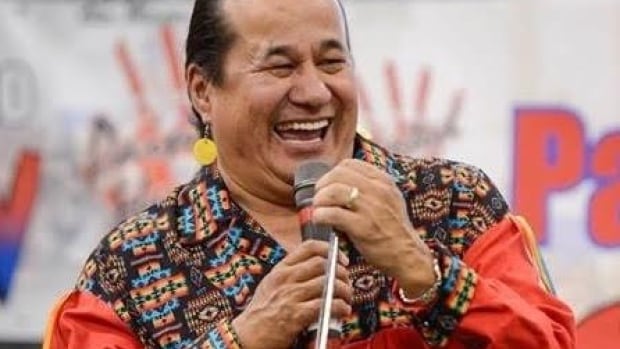 Stand-up comedian Cree Don Burnstick, who has been touring the country for decades, is heading to Cambridge Bay, Nunavut for a show, and two local comedians – and big fans – are about to perform for him.

For two people who have grown up listening to Bernstick, it will be a dream come true to perform on the same stage with him.

“I’ve been a big fan of Don for as long as I can remember,” said David Ohokannoak.

“Just talking about it now gives me butterflies in my stomach because I have wanted to meet and perform with Don for a very long time. And now that it’s finally happening… It’s a lot to accept.”

But getting on stage isn’t always easy, says comedian Eric Keatigon, who will also open for Burnstick.

“It’s a lot of stress, for example, to speed up, get up on stage and perform in front of a crowd of more than 20 people,” Kitigon said.

“But it’s fun to perform there with friends who also want to show themselves and show what they have to talk about.”

Kitigon said that writing and performing is one of the most difficult aspects of being a comedian.

“A lot of times when I record something, it comes back to me like it sounds funny. But the more I say it out loud, the more I think about it, it starts to lose its fun,” Kitigon said.

As for Ohokannoak, he said it’s all about writing stuff, shaping it, and then memorizing it.

“If I come up with a joke at any time during the day, I will just write a little footnote about it on my phone. And then when I get home, I take this footnote and kind of expand it,” said Ohokannoak.

Ohokannoak added that it’s also about delivery and timing.

“By the time I finished writing, I had rewritten the same joke probably three or four times before I found it was really presentable,” Ohokannoak said.

“After that, it’s all about remembering.”

Kitigon said he respects Ohokannoak, who has been a comedian longer than him, and said he prefers to perform first so he doesn’t have to follow Ohokannoak’s performance.

“It’s such a great feeling to listen to your friend explain his ideas in ways you never imagined it would work.”

“Watching him get up in front of me,” said Ohokannoak, “and kind of cheer everyone up, make people laugh, it puts a little pressure on me because, like, I have to follow this guy?”

At the same time, Ohokannoak said it was funny to hear Kitigon joke about “knee slaps”.

Kitigon said that the prospect of performing on the same stage with Burnstick is like “out of the body”.

“I saw this guy many times,” he said. “It’s such a great feeling to be there to enjoy this guy who showed us part of how we can do it.”

As for Ohokannoak, he said he was looking to entertain Bernstick.

“I really hope he laughs at what I have to say,” he said, adding that he could ask him for feedback on his own act. “There’s no way to tell how big a fan I am of him.”

The show will be organized by the Kitikmeot Friendship Society on 27 August.

Attacking a suicide nuclear plant, says UN chief as he asks for access to...