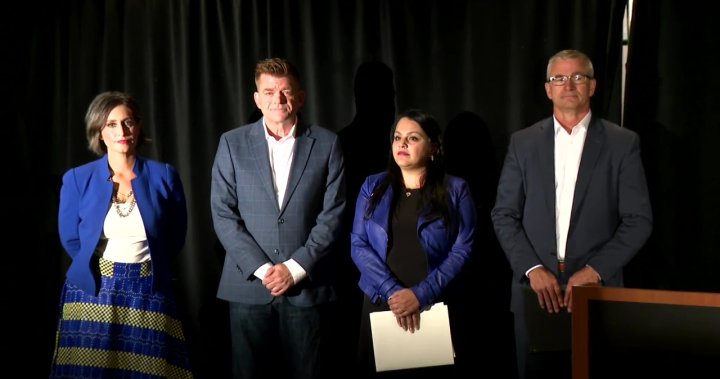 Seven candidates running for the next leader and prime minister of the United Conservative Party disagree on whether Alberta should create its own provincial police force.

Four of them said in Thursday’s debate that this is not a plan that they will be implementing right now.

“Not now,” candidate Rebecca Schultz said to applause from local leaders at the annual meeting of Alberta municipalities in Calgary.

“It is not supported by the vast majority of municipalities. And it’s not something that really came across anyone’s doorstep when I traveled around Alberta.”

Schultz said more needs to be done to reduce rural crime response times and keep cities safer, but added that this could be addressed immediately by spending more money on specialized crime-fighting units and rural police initiatives.

Danielle Smith said the goal is to improve police performance at no additional cost, and that more systemic changes are needed to help police deal with more cases of mental health and addiction.

“I would like to move immediately to beef up our current (RCMP) police force,” Smith said.

Travis Toews said he supports the provincial police service to better fight crime, but understands that municipalities are worried that they will have to bear onerous costs.

“I know you’re worried that you’ll have to pay the bulk of the bill,” Toews said, promising to work with local leaders to resolve the issue.

Leela Ahir said there was not enough consultation with the municipalities and not enough details on how it would be paid.

“There was absolutely no information about funding, and it’s strange how this information got on all our tables,” Ahir said.

“We’ll talk about it and move forward, but I don’t support it at the moment.”

Brian Jean said the problem is bigger than the number of cops and should also include stopping the “revolving door of criminals through our justice system”.

Jean added, “I pledge not to remove the RCMP from Alberta.”

Todd Lowen said that about six out of ten Albertans already receive police service from non-RCMP officers, and the rest should at least be able to make the same deal.

“I support the provincial police. But do I think municipalities should pay for it? No, Lowen said.

Rajan Soni described the provincial police proposal as a solution to the problem and said more consultations were needed.

“I have absolutely no support for the Alberta police,” Sony said. “I have not heard a single elected official speaking in his support.

“We’re trying to move on to solving a problem that hasn’t been clearly articulated.”

Alberta Municipalities President Cathy Heron said they do not support the current model proposed by the government last fall.

But Heron said they are open to exploring more options, perhaps hybrid models, and ways to address the root causes of crime more effectively.

“We would be open to talking about the provincial police – just not the one that was proposed,” Heron said in an interview.

Earlier this year, Alberta’s rural municipalities said they supported keeping the RCMP and opposed the idea of ​​a provincial police force because the government failed to demonstrate how it would improve service levels in rural areas.

Prime Minister Jason Kenney’s government is still considering whether to go ahead with a plan to replace the mountain police officers who currently serve in the countryside and some smaller towns.

A report by an outside consultant published last October said the RCMP costs Alberta about $500 million a year. The federal government is contributing $170 million under a cost-sharing agreement. The report says that if Alberta decides to go it alone, it will cost about $735 million a year, on top of $366 million in start-up costs.

But it says there is potential for more cost-effective law enforcement by leveraging existing human resources and public financial services to save money, and by developing agreements with municipal forces to share specialized services.

The UCP members will elect a new leader to replace Kenny on October 6th.

— With files from Colette Dervores in Calgary.